Home ≫ Who We Are ≫ Founding 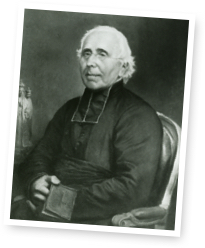 Twelve young ordained men, including Fr. Jean-Claude Colin, pledged their lives to the service of others in the spirit of Mary at the shrine of Our Lady of Fourviere in Lyons, France

Fr. Colin elected “superior” of the group of first Marists

Fr. Colin resigned as Superior General. This time of prayer allowed him to work on the Constitutions

The Marists Fathers and Brothers are part of a worldwide community represented in Africa, Australia, Brazil, Canada, Europe, Mexico, New Zealand, Oceania, Peru, the Philippines, and the United States. Under the direction of Fr. Colin, SM the Marists expanded their mission and ministry by serving those least capable of helping themselves. This became a Marist trait that helped characterize the Society as it grew into a global missionary force centered in Marian spirituality.