Home ≫ Who We Are ≫ Mary Model of Contemplation 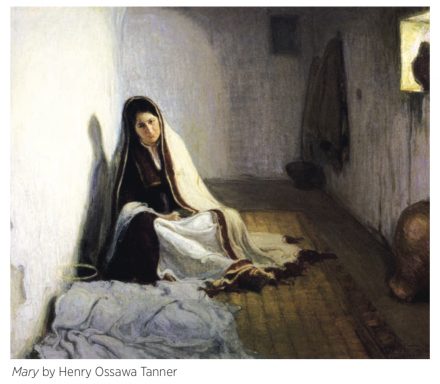 At a recent retreat for the US Province of the Society, one of our Marist historians, Fr. Alois Greiler, SM, described for us a study done by Fr. Monnier-Vinard, SJ, in 1931, called Mary, Queen of Religious Life. The study examined the manner in which a large number of Catholic religious orders describe and live out their relationship with Mary. It found a perplexing paradox in the Marists: of nearly any religious order, Marists are both the most and the least centered on Mary. This paradox leads to the central reality of Marist life: while no particular Marian devotion captures the heart of the Marist spirit, the Marist charism calls us simply to be Mary in the Church. That can be hard to comprehend without a mystical dimension to Marist life. One Marist, Fr. Ed Keel, SM, explains a way of perceiving Marian devotions in our Marist life: without dismissing or putting down Marian devotions, we realize that we are called to something much deeper as Marists; more than committing ourselves to specific devotions, we are called to become Mary’s devotion in the midst of the Church.

How does a male Marist live out his life as Mary? That was one conversation at the retreat, but not “deep enough.” In one of the most lyrical and beloved paragraphs of the original Constitutions (49) , Fr. Colin paints a magnificent picture of what a Marist would look like if he or she became Mary to the Church. Yet the paragraph uses the language of values and virtues which one could, perhaps, “slavishly” try to imitate, but such imitation would still not lead us to the fullness of “becoming Mary to the Church” and thus cannot be the path of Marist life.

Being Mary and Marist Spirituality

Leaving behind the question of imitation, we turn to look at another dimension of “being Mary” by another Marist scholar, Fr. Justin Taylor, SM, author of the new biography of Jean-Claude Colin, now in the process of publication. A number of years ago he did some of the finest research on the origins of Colin’s spirituality ever done. Many would say that the genius of Jean- Claude Colin was not in inventing a new spirituality, but rather in applying a contemplative and mystical spirituality already in the air to a profoundly new pastoral vision that pulls together an integration of Mary in the Church (quite like the approach of Vatican II). This vision results in a changing interpretation of the “signs of the times,” and moves from a triumphalist vision of the Church into one of a Church rooted in humility and mercy. Such a Church would be better able to engage the “people of this time with their love for justice.” Secularism was rampant in France during Fr. Colin’s time as in our own, and the Church was losing touch with both the elites and the common people. Marists, in “becoming Mary to and in the Church” would — by their very presence and mode of acting — be agents of Mary, bringing about a renewed Church (or even, as Fr. Colin boldly asserted at one point, a “new” Church).

In that same study, Fr. Taylor explores two very well-known schools of spirituality spinning in the air around Fr. Colin: the French School of the Sulpicians and a school of contemplative, mystical Jesuits who were prominent in the two centuries before Colin. These Jesuit mystics saw a melding of apostolic activity and mysticism that sounds much like the contemporary Jesuit way of naming themselves: “Contemplatives in Action”. It is clear since Vatican II that all of us – not just monks and cloistered nuns – are called to the holiness of a contemplative life, but within the context of our own personal call in life. A study done many years ago showed that a majority of people in the US have had what they considered mystical experiences of being taken up into an inner experience, beyond the usual, everyday experiences of life. But at this point, digging any further into Fr. Taylor’s extraordinary insights into Colin’s spirituality would turn us too deeply toward historical scholarship. Suffice it to say that Fr. Taylor’s work shows
the contemplative, if not mystical, origins (roots?) of Colin’s spirituality.

Returning to Colin’s lyrical words in paragraph (49-50) of the original Constitutions, we are given a hint of how to proceed from this sense of mysticism: “…and so they must think as Mary, judge as Mary, feel and act as Mary in all things, otherwise they will be unworthy and degenerate sons.” How can we really know how Mary thinks, judges, or feels? It is not behavior that we can honestly say we readily understand. These movements are interior to Mary.

We could conclude that the statement is only an aspiration and weaken it into only a metaphor. We already question whether a mere slavish imitation of Mary is even possible or enough, but Colin was not a man for empty metaphors: he meant this as written. We can – and must – work towards an internalization of Mary herself into our lives, so that we unthinkingly and spontaneously exhibit the qualities, values, and virtues of Mary set out in Constitutions 49-50. We must “become Mary,” otherwise we are grasping in vain, trying to imitate her moment by moment and step by step, in a way that is not the least bit spontaneous, peaceful, or healing for us or others that we engage in our lives.

It should be no surprise then that a General Chapter – intensely aware of our fragility as a group and even more taken with the power of secularizing individualism in tearing apart communities and Church congregations, even sending society itself spinning into fragmentation and polarization across the world– would be drawn back to our origins and recall the fullness of our vocation as Colin envisioned it. We hope that the cover of our current Today’s Marist might help exemplify for us the movement of Mary from the mystical moment of the Annunciation, through and over the mountains, going forth to serve her elderly cousin, responding to her cousin’s needs as best she could. These two moments meet in the magnificent canticle of the Magnificat, prophetically seeing a world turned upside down by the power of the Spirit–the proud and conceited are being scattered, the mighty are being pulled down from their thrones, the humble are being exalted, the poor are being fed. So from mysticism into mission but not so quiet and peaceful a mission
in the eyes of the world seen through the prophetic eyes of Mary.

Let me close with the Identity Statement of the US Province, written collaboratively by the whole province as a body in 2013. It may help show how the gift of Vatican II and its aftermath has brought the Holy Spirit and Mary closer together in the Church’s consciousness, and helped us Marists to move ever deeper into our own call to become Mary in the Church in our own times unburdened with the ideology of secularism.